For the longest time, dogs have fascinated man. So much, it’s hard to find a neighborhood without a pet dog running in the backyard sometimes on a leash. While experts detail these domesticated dogs are actually a descendant of the wild wolves of long ago, we put our faith in our dogs. For many Americans, their furry friend isn’t just an animal to play with and tag along. It’s part of the family.

However, far beyond all the fun and excitement with a dog is a teacher’s moment. Indeed, having your son or daughter who has watched a young pup grow alongside their own growth is a blessing. Not only will your child exact plenty of adventure and tons of good times with a dog around, but he’s also bound to learn emotional development. Many people may think it’s but coincidental. But below we detail the importance of emotional intelligence in a child and a dog can help a child achieve such. In the process, becoming a more well-rounded social human being.

The Importance of EQ

Over the years, the tides have changed. Where before many psychologists and scientists proclaimed to the world the importance of IQ or the intelligence quotient, today companies are on the prowl for leaders with EQ, short for Emotional Quotient.

And it’s but natural. Emotional intelligence in a person allows him to persevere even under pressure. Even better, he’d have his emotions under wraps when the situation calls for it. In short, he’s in command – not allowing his emotions to rule his decisions.

Of course, we now know EQ as the ability of a human being to be in sync with his emotions realizing their power. Most importantly, it’s about harnessing one’s emotion to effect a positive outcome of a current situation.;

Victor Cheng, a celebrated author/strategy consultant who came from renowned firm McKinsey & Company expounded that individuals with high IQ eventually fail in their careers because of low EQ. Leaders with good EQ are capable of establishing relationships and managing people.

Thus, a CEO with high EQ is most sought-after. It’s about mental toughness and the ability to relate to people better, one Forbes author expounds. In a high-stakes environment such as our coronavirus crisis today, developing greater EQ in your child is top of the list. 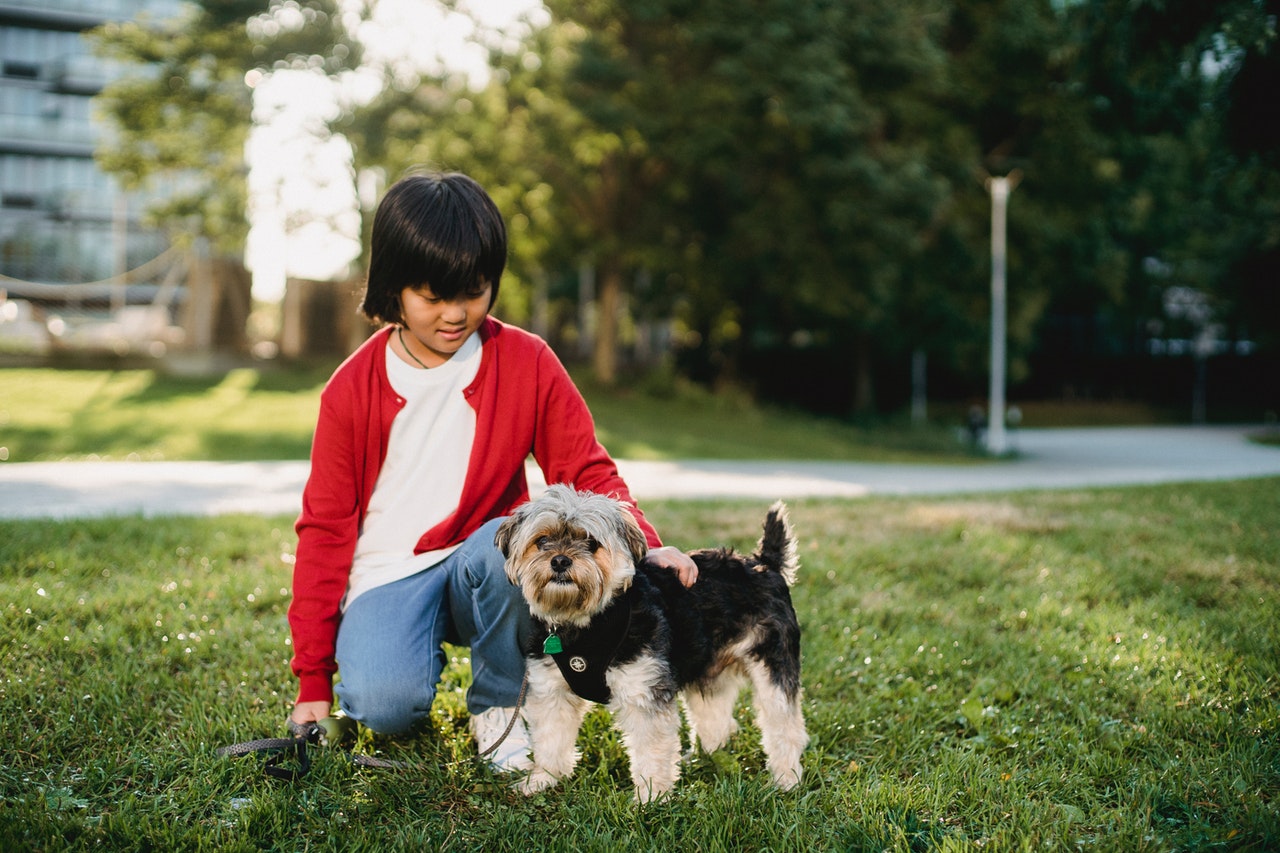 How Dogs Make EQ Happen in a Child

Right off the bat, when your child thinks of his pet’s welfare he is developing EQ. At first, it’s natural for children to think of puppies as an extension of their motionless toys. But as time progresses and he sees you feeding their pet, he goes out of his shell. He realizes he needs to take care of the puppy to grow. He shows empathy and compassion.

In a sense, you should also watch the welfare of the child. Sometimes, puppies can get ahead of themselves and may bite or exhibit rude behavior. This is where puppy training can go a long way. It allows the good side of your pet to come out, allowing better bonds with your child to flourish.

Secondly, by being your child’s non-judgemental pal, a dog can boost his EQ. You may call it unconditional love though we know only humans do that. Nonetheless, think about it. Dogs befriend your child for who he is. Unlike perhaps in school where classmates could discriminate according to reading abilities or the shape of the eyes.

Thirdly, a dog can help your child relate to nonverbal cues, one of the foundations of EQ. It’s no secret a leader who can relate to nonverbal communication is a better leader. He is able to have a good grasp of the situation and act accordingly. Of course, children are not born with these skills; but having a dog around will help them understand and learn faster.

Moreover, dogs can help children be in touch with their nurturing self. Oft-times boys are afraid to show tenderness, affected by all the macho stuff thrown out in movies and the media. But with a pet dog, young boys become accustomed to showing affection, hugging their pet dogs, and nurturing them with touch and caresses. In doing so, they also learn to express their emotions.

Lastly, a dog can be the ultimate teacher in responsibility. By showing that taking care of a puppy for instance can help the animal become a full-grown healthy dog, your child can practice the habit of being responsible. It’s a step-by-step process. You wouldn’t expect your 3-year old toddler to give your Doberman a bath, right? But he can always help in feeding such as doling out cookies for instance.

It won’t happen overnight. But with a dog around, your child’s EQ should grow by leaps and bounds over time.